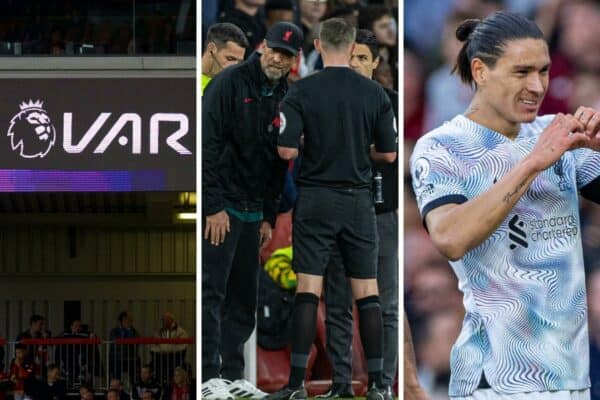 Liverpool’s meeting with Arsenal has exposed a flaw in VAR, an incident from the game is to be investigated by the FA and Rangers are ready to “be brave” on Wednesday.

The result is the result, Liverpool dug their own holes and tripped up, they have to accept that – the performance at Arsenal was not one worthy of a victory.

However, the match has raised an unbelievable issue with VAR, in which it has a blind spot that made it impossible to detect whether Bukayo Saka was offside in the buildup to Arsenal‘s first goal.

Dale Johnson, ESPN‘s resident VAR specialist, readily breaks down various incidents throughout a Premier League weekend and Liverpool’s trip to Arsenal was full of them.

But we’re just focusing on the first goal, which from the human eye looks as though Saka is offside, however it could not be checked.

The Monday VAR Review has landed!

“Technology provider Hawk-Eye has five cameras around the pitch which can be used to place the offside lines, but Saka was out of shot on all of them at the point the ball was played by White.

“But as the VAR could not apply the lines, Saka’s offside position cannot be determined so the VAR has to stay with the decision on the pitch, which was onside.”

The linesman kept their flag down, as they’re instructed to on marginal calls, but who is to say they wouldn’t have raised it knowing there was no VAR for support, it’s bewildering.

A similar issue occurred for Juventus last month with cameras missing an opposition defender that would have ensured their goal stood. How is it allowed to happen?

As we say, it’s not an excuse more just to highlight the incredulous systems in place, or in this case not.

Adam Driver on the set of The Last Dance, an Alan Pardew biopic centred around the 2016 FA Cup Final pic.twitter.com/OKymZ4nuse

There is Monday night football in the Premier League with Nottingham Forest hosting Steven Gerrard’s Aston Villa at 8pm (BST). The two teams are separated by four points.

And to make this season all the more distressing, if Villa win they will move ahead of Liverpool in the table…