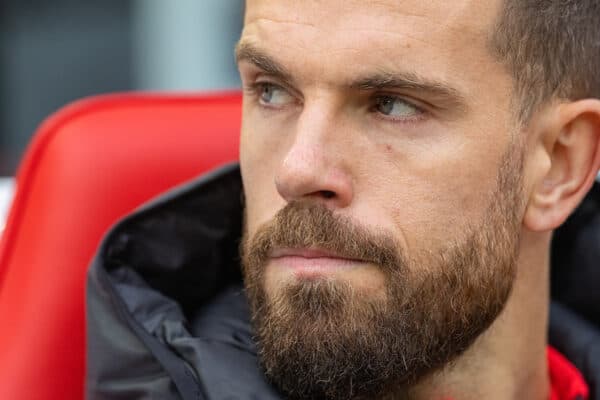 Jordan Henderson has become the latest midfielder on the absentee list after sitting out Liverpool’s clash with Napoli, having trained separately.

It has been a constant issue for Jurgen Klopp this season, with there never a stage in the campaign when he has been able to call upon a full midfield group.

Alex Oxlade-Chamberlain, Arthur, Naby Keita, Curtis Jones and Thiago are among those to have spent time on the sidelines, with 18-year-old Stefan Bajcetic in the matchday squad for 14 out of 19 games so far as a result.

Reports in Germany, which appear to be via Klopp’s agent, claim that Liverpool will target another central midfielder in the winter transfer window.

And it should come as no surprise, with Henderson now missing another game as he was not in the squad to host Napoli at Anfield on Tuesday night.

The captain’s absence comes after he failed to emerge with the rest of the squad for open training the day previous, instead being spotted undergoing individual work in the gym.

While it had been suggested that Henderson was not a doubt for the Group A closer, that has now been proved false, with no risks taken with his fitness.

There is no sign at this stage that the 32-year-old is facing an extended spell out, but this development highlights, again, how difficult a situation Klopp finds himself in.

“In the moment, it’s not 100 percent fair to judge the team, which means the squad obviously, because we never had them available,” he said before the game.

“We miss, especially now up front, top quality, which is not helpful.

“That doesn’t mean that the others are not top quality, they have that, but with the amount of games we have, usually you would make changes. We can’t do that.”

Ironically, Henderson was the sole player to be rotated out of the side for the clash with Leeds on Saturday, only coming off the bench for the final half-hour as Liverpool lost 2-1.

RB Leipzig’s Konrad Laimer has been named as a possible target for the winter window, along with Brighton youngster Moises Caicedo.

There is no option to cut short the season-long deal for Arthur, who is facing months out.