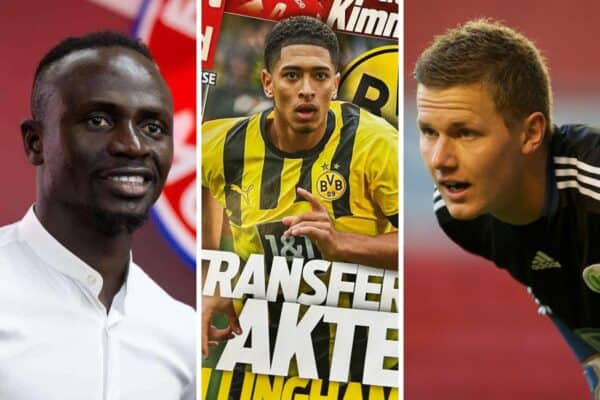 In today’s Liverpool news round up, the Reds are again at the centre of transfer speculation surrounding Jude Bellingham, and have also been linked with a goalkeeper in Germany.

“All in on Bellingham” – But will it be enough?

The morning after the Reds’ encouraging win over Napoli, Liverpool fans on social media were talking about Jude Bellingham… again.

German outlet SportBild have reported that Jurgen Klopp and director Mike Gordon have agreed to “attack Bellingham properly” as the “face of the future” for the club.

Not quite all in as the report suggests, then.

Sky Sports’ Melissa Reddy has said Liverpool have “put in the heaviest work over a long period behind the scenes to pierce the player’s decision-making process.”

While ex-Norway striker and European football journalist Jan Aage Fjortoft says there is one club “working very hard behind the scenes” to make a deal happen.

Liverpool? Chelsea? City? Real Madrid? Your guess is as good as ours.

However, if the Reds really do have aspirations to get their man, surely they must at least secure a top four finish this season?

3 things today: A new back-up goalkeeper on the agenda?

Elsewhere in the Premier League

Tweet or video of the day and matches of the night

Darwin Nuñez is mad as a box of frogs and I love him, hahahaha!https://t.co/3wG7J5pLje pic.twitter.com/KdvTX1nvgr

Tonight marks the last day of men’s Champions League football until next year, with Real Madrid vs Celtic, Man City vs Sevilla, Chelsea vs Dinamo Zagreb and Juventus vs PSG among the standout fixtures.