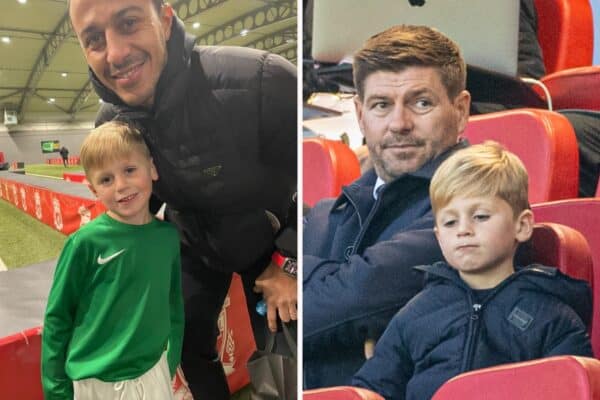 Steven Gerrard’s son, Lio, has already amassed quite a collection of photos with Liverpool’s current players and added Thiago to the list after a visit to the academy.

Gerrard was back on media duties for Liverpool’s meeting with Chelsea over the weekend, three months after he was dismissed by Aston Villa.

The former Reds captain was busy saying he’d fly out to Dortmund to help Liverpool’s pursuit of Jude Bellingham, but at the same time spoke of his wish to still be a Premier League manager.

We’re happy to let him have it both ways!

But while he was busy talking of a potential future midfielder for Liverpool one day, the next he was rubbing shoulders with current midfielder Thiago.

And his son did not waste the opportunity to capture the moment, with Gerrard sharing an image of Lio and Thiago with the caption: “Dad can I have a [picture] with the pass master.”

Suppose he already has enough with his dad!

They crossed paths at Kirkby with Lio appearing to have taken part in activities at the academy, sharing a love for the game with his Dad.

The pair attended their first Liverpool match together back in November in the 3-1 win over Southampton, with Lio posing with the likes of Mo Salah, Roberto Firmino and Ian Rush.

Gerrard is certainly enjoying time with his family after leaving Aston Villa last year but his next step in management could now loom and it may be on the international stage.

Earlier this month it was reported that Gerrard had been offered the vacant post as manager of the Poland national team after Czeslaw Michniewicz’s contract was not extended beyond the World Cup.

He was said to be considering “accepting the offer” but there has yet to be any development and in the meantime, Gerrard is dipping his toes back into media work.