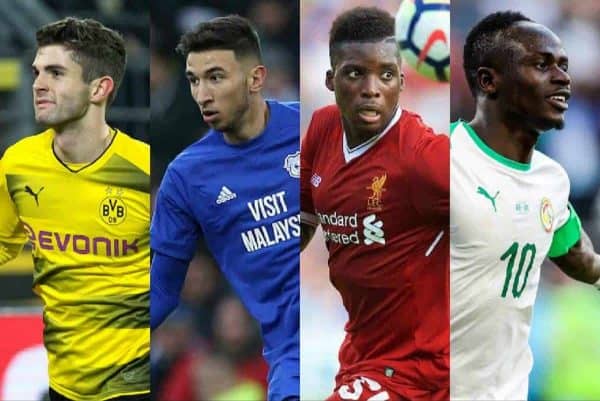 We round up the latest Liverpool news and transfer rumours on Thursday, following the Reds’ late victory over Man City in New Jersey.

As soon as Christian Pulisic scored twice against Liverpool last Sunday it was inevitable that reports would again link him with the Reds.

It seems highly unlikely that any bid will be made for the prodigious American this summer, but Borussia Dortmund have now named their asking price for him.

According to Goal‘s Ronan Murphy, via Kicker, Pulisic will only be able to leave Signal Iduna Park if an offer of over €70 million is made.

He’s worth it, especially when you consider what a marketing dream he would be, but don’t expect to see him at Liverpool in 2018/19—with a move instead expected in 2019.

However, Klopp has expressed his desire to sign the 19-year-old, and Dortmund’s valuation is similar to the fee agreed with Lyon for Nabil Fekir…

Sadio Mane on the No. 10 Shirt

Sadio Mane was electrifying in Liverpool’s 2-1 victory over City, combining pace and directness with creativity, and scoring the winner from the penalty spot in the dying seconds.

The 26-year-old was handed the No. 10 shirt at Anfield earlier in the summer and in an interview with LiverpoolFC.com, Mane gave a fairly simple reason for his happiness at taking the prestigious shirt number:

“No. 10 has always been my lucky number, so I’m happy to take it this season.

“But the more important thing is what I’m trying to do for the team and especially helping the team as much as I can to win games.”

The early signs suggest he will flourish in his new jersey.

Sheyi Ojo Off to West Brom?

Sheyi Ojo didn’t feature in the victory over Man City and there is fresh speculation surrounding his future, having been reported to be on a list of outgoings this summer.

The Liverpool Echo‘s James Pearce has confirmed that West Brom have “registered an interest” in the winger, who is valued at £15 million, although Nottingham Forest are also keen to bring him to the City Ground.

Middlesbrough and Reading are two other clubs to have expressed an interest.

It never quite felt as though Ojo would make the grade at Liverpool, but he is a talented winger who could thrive for a Championship club.

Meanwhile, the Guardian‘s Andy Hunter also believes Wolfsburg are interested in the 21-year-old.

Marko Grujic is expected to head out on loan before the start of the season, with a permanent move unlikely.

A return to Cardiff City has been widely reported and Bluebirds boss Neil Warnock has spoken of his confidence at landing the young Serb.

“I spoke to Marko yesterday, we are still optimistic, but we should know in the next few days,” Warnock told BBC Sport.

“If he’s not staying there I think he will come to us, it all depends on the negotiations.

“There is a contract involved, but it will be resolved, I’m sure they will make a decision shortly.”

There was no Naby Keita to enjoy against City, with the Guinean suffering from a sore neck since Tuesday.

The club have now confirmed that he will sit out the next couple of days of training and is a doubt for Saturday’s meeting with Man United in Ann Arbor.

Looks like we may have to wait a little bit longer to see Keita working his magic alongside Mohamed Salah and Sadio Mane.

Meanwhile, Nathaniel Clyne is returning to England early after being granted permission to leave the US tour due to family reasons.