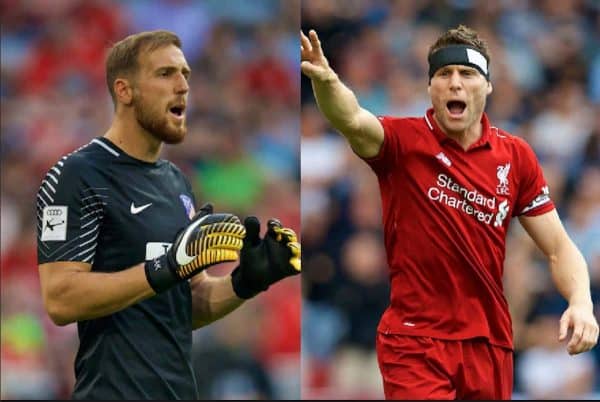 We bring you the latest Liverpool news and transfer rumours on Tuesday, with various European transfer windows closing later this week.

Liverpool snapped up Alisson from Roma this summer, with the Brazilian already making a positive impact between the sticks.

According to Spanish publication AS however, via Sport Witness, Jurgen Klopp saw Atletico Madrid stopper Jan Oblak as his preferred choice originally.

“During this summer, Liverpool were the club that was more interested in the situation of the Slovenian goalkeeper of Atletico,” the report reads.

“Those at Anfield, like Jurgen Klopp himself, dropped in some declarations that they saw Oblak as first choice, but they had to remain in the €80 million [limit] with which they could pay for Alisson.”

While Oblak would also have been a superb signing, it looks as though Alisson is the perfect goalkeeper for Liverpool moving forward.

In an interview with ESPN, FC Midtjylland boss Glen Riddersholm, who worked with Gronnemark in 2014, discussed the influence he could have at Liverpool:

“I think it’s modern and fresh. I like the approach.

“In football everybody knows almost everything. The small teams with all the wisdom and knowledge that is out there, it’s very difficult not to organise a team, have a good solid plan.

“You need [something] extra. Every aspect is important. From that point of view, I think [the appointment] is smart and understandable.”

It is an intriguing move by Klopp and it will be fascinating to see the impact Gronnemark manages to have.

It’s fair to say Scottish football isn’t highly thought of when it comes to quality, even though the likes of Andy Robertson and Virgil van Dijk have proved their worth at Liverpool after stints at Celtic.

Speaking to the Herald, James Milner defended the standard of football further north, admitting he would never rule out a move there in the future:

“I don’t have experience of Scottish football myself, but I have seen the players who have come down from Scotland over the years and know players who are playing in Scotland now. I think you can see how many good players there are.

“Speaking to any of the young lads who have come up here to get the experience they all say it is fantastic to come up here and have the opportunity play in games of that size with that pressure and that expectation and learn from it. It is brilliant for them.”

Milner was talking ahead of this Sunday’s eagerly anticipated Old Firm derby between Celtic and Rangers at Parkhead, which sees Brendan Rodgers and Steven Gerrard go head-to-head as managers.

Liverpool’s players took part in a double training session at Melwood on Tuesday, as they prepare for their trip to Leicester City on Saturday lunchtime.

Divock Origi was present, despite rumours linking him with a move away from Anfield before the transfer deadline, with Simon Mignolet and Dominic Solanke also participating.

Dejan Lovren, Alex Oxlade-Chamberlain and Rhian Brewster are all injured, though, and there was no sign of Gini Wijnaldum in the photos, following a strong start to the season:

It may simply be that the Dutchman didn’t catch the photographers’ attention, however, with no news emerging about him carrying a knock yet.