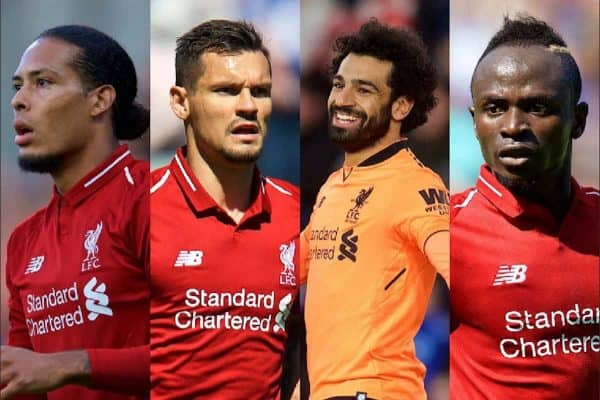 We round up the latest Liverpool news and transfer rumours on Monday, as the return of the Premier League slowly edges closer.

Virgil van Dijk‘s reputation as one of Europe’s best defenders is growing all the time and he has made the shortlist for the FIFA FIFPro World 11, voted for by fellow professionals.

Dejan Lovren is also included after reaching both the Champions League and World Cup finals this year, in what has been a dramatic turnaround for the Croatian.

Mohamed Salah and Sadio Mane are unsurprisingly in the mix in attack, but Roberto Firmino has been criminally omitted, however.

The FIFPro World 11 will be unveiled at the Best FIFA Football Awards ceremony in London on September 24.

Reds Pull Out Of Rabiot Race?

Recent reports claimed Liverpool were in pole position to sign PSG midfielder Adrien Rabiot on a free transfer, but there are now very different rumours doing the rounds.

According to Football Italia, the Reds have “pulled out” of a potential deal for the classy midfielder, with Juventus, AC Milan and Barcelona now battling for his signature.

The 23-year-old is one of the most promising young French players, but his days at PSG appear to be nearing an end, with his contract expiring next summer.

This report shouldn’t be taken too seriously for the time being, with Football Italia not always famed for having the most concrete information.

Liverpool have started the season with four victories on the bounce, despite rarely being at their best at any point.

One man who believes the Reds’ ability to win ugly bodes well is former manager Roy Evans, who told Liverpoolfc.com that a title challenge looks on the cards:

“So far this season it has been win, win, win – which is brilliant.

“We’re not playing at our very best, Jürgen has admitted that and I agree. We have not been brilliant but we’ve been a lot more compact.

“To win games on the days you don’t play so well, that’s a hint of saying you have a chance to win the Premier League because when we play well, which is most of the time, we win.

“And if we can add the results of the odd bad day to it, you’re going to be pretty close.”

Liverpool kick-off their Champions League campaign at home to PSG on September 18, as they look to go one better than last season.

It has been revealed that the Reds are guaranteed close to £35 million just for playing in the competition, regardless of where they exit.

They have scooped £13.64m for reaching the group stages, while their 12th-place coefficient ranking will pocket them £20.75m.

UEFA have offered a 38 per cent increase in overall prize money for European tournaments this season.

According to reports in Turkey, Liverpool and Besiktas have agreed a deal over the image rights of Loris Karius.

The goalkeeper is on a two-year loan spell in Turkey having been moved on by Jurgen Klopp this summer, after a bitterly disappointing end to last season.

Besiktas are thought to be keen on Karius becoming a brand ambassador for the club, with the 25-year-old already on the front cover of their monthly magazine.

Alisson to be Kop hero

From one goalkeeper to another to finish up with.

Former Reds stopper Chris Kirkland, who now coaches with the LFC Women’s team, says Alisson will be a huge hit at Anfield.

“His calmness and presence are his big assets.

“Nothing seems to faze him at all. He doesn’t over-react to any situation and he is level-headed. That seems to be his nature during an entire 90 minutes and that will stand him in good stead at Liverpool, where the pressure can be so intense.

“If he can solve what has been a problem area for the Reds — and I’m sure he can — then he will be the new hero.”

With three clean sheets in his first four games, the Brazilian has certainly made an eye-opening start to life at Liverpool—even factoring in his goal-costing error against Leicester.