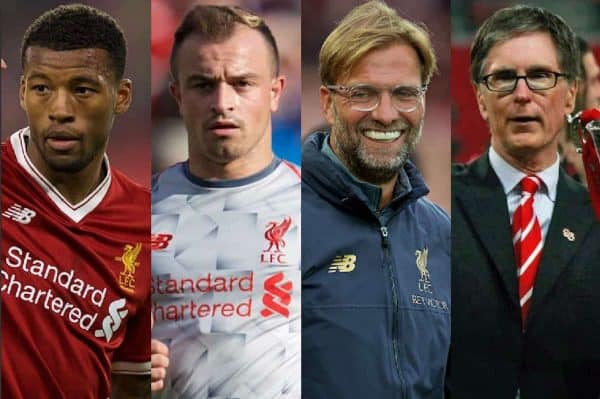 We round up the latest Liverpool news and transfer rumours on Monday, as a relatively quiet week for the Reds gets underway.

The Swiss attacker talks on responsibilities in both halves of the pitch.

After facing a succession of top-end teams, Liverpool’s fixture list has been very different recently.

Keep an ear out for a new chant on the terraces!

Is this the opportune moment to finally seal a move for the playmaker?

A first goal for one; two suffer semi-final heartache.

Opinion: the fall-out and the reaction from the weekend win.

Wijnaldum On Thriving As An All-Rounder

Gini Wijnaldum is enjoying an excellent season and in an interview with the PFA he has been discussing the benefits of maturing into more of an all-round midfielder:

“I think I’ve shown I have the defensive discipline to play deep as the No 6 and start the build ups with my passing. I can also play higher up the pitch and make a difference in the opposition area. Being able to do both has helped me to play so many games.”

The 27-year-old also spoke about Klopp enticing him to Liverpool in 2016 at a time when Tottenham were also interested, saying the German was the key to him joining:

“When I spoke with Jurgen he made me feel really good. He gave me a lot of confidence because he said he liked my way of playing football.

“Three days after our meeting they had reached a deal and I didn’t think twice. This is one of the biggest clubs in the world. I wanted to make the transfer and I’m happy that I did.”

Xherdan Shaqiri was again excellent when he came on in the 4-1 win over Cardiff City on Saturday, scoring his first Liverpool goal and looking a menace throughout.

The Swiss believes his new club can go one better in the Champions League this season, as he dreams of a second triumph in the competition.

“I won the Champions League with Bayern Munich and that was an unbelievable feeling,” Shaqiri told reporters.

“I dream about doing that with Liverpool and why not? It’s great memories, so why not a second time?

“We have the quality to go very far and last year they got to the final. They didn’t win the Champions League but we will try to do the same again this year.”

One of the Reds’ shortcomings in the defeat to Real Madrid in last season’s final was a lack of depth from the substitutes’ bench, but Shaqiri is proof of how much that has improved.

To have somebody of his quality in reserve will only aid Jurgen Klopp‘s men in their bid for a sixth European Cup; having said that, Shaqiri is playing his way into a starring role at the moment.

Liverpool had to work hard for their victory over Cardiff, even though the scoreline suggests otherwise.

Sadio Mane‘s superbly-taken, battling goal made it 2-0 and Klopp believes the persistence the Senegalese showed summed up the Reds’ approach.

“Yes, absolutely. It was like this and you have to do it like this,” Klopp told Liverpoolfc.com.

“It’s like a whole counter-press situation: lose the ball, get it back, shoot and fire in, so that’s really good. We had these situations against Belgrade [and] you need that. You need that constantly, actually.

“You need to play the pass with the risk to lose it. If you lose it you can win it back and then you have a gap at least for a second or so. To create a gap in a game like this you need kind of 10, 15 passes.

“We did that in a lot of moments really well. I don’t know the percentage of possession but it should be massive as they didn’t have the ball a lot. That’s what we prepared and I’m really happy.”

Speaking to American TV after their achievement, the 69-year-old says he believes similar success can come Liverpool’s way this season, with various areas of the pitch improved upon:

“Kyiv was painful. But getting there, you could say we’re a little ahead of schedule.

“I think Jurgen has solved our defensive issues and we are really strong at the back and really strong in midfield and everyone knows how good we are up front.

“That, as well, is a very special team and it could be a special season.”

The Reds have still only won one trophy under FSG’s ownership—the 2012 League Cup—but this is the strongest they have been as a side during their tenure.

Just imagine the scenes if a title win could be achieved—Red Sox supporters would have nothing on us!

Divock Origi may be playing little-to-no part for Liverpool this season, but reports in Italy suggest he is wanted by one of Europe’s top clubs.

According to Calcio Mercato, Juventus are keen on signing the Belgian striker in January, seeing him as a good back-up option to Cristiano Ronaldo.

The Reds are set to want at least £20 million for Origi, should a move away from Anfield materialise, so the Serie A champions wouldn’t be able to get him on the cheap.

It seems like an odd one, that’s for sure, so perhaps don’t read too much into it.

Everton, Besiktas and Wolves have also been linked with the striker.

Liverpool’s U23s travel to Blackburn Rovers on Monday and boss Neil Critchley is pleased to have Bobby Adekanye available after injury, as he continues to work on improving the winger as a footballer.

“We missed him against Derby and what we miss is his ability to take players on and get at people. He eliminates defenders and takes people out of the game which opens up the game for other people,” Critchley told Liverpoolfc.com.

“His performance after two-and-a-half weeks out against Red Star Belgrade was really encouraging. I thought it was a terrific game from him but unfortunately it was probably another game you could probably say Bobby could have walked off with the match ball.

“It’s something we have got to work on with Bobby, to improve his consistency of finishing and we are working with him.”

Critchley also discussed his decision to award the U23s captaincy to midfielder Matty Virtue, saying “responsibility is an area of Matty’s game that we have been speaking to him about, being a senior player for the U23s.

Kick-off this evening is at 7pm (GMT); you can watch the match live on LFCTV GO and we’ll have a full match report on This Is Anfield at full time.