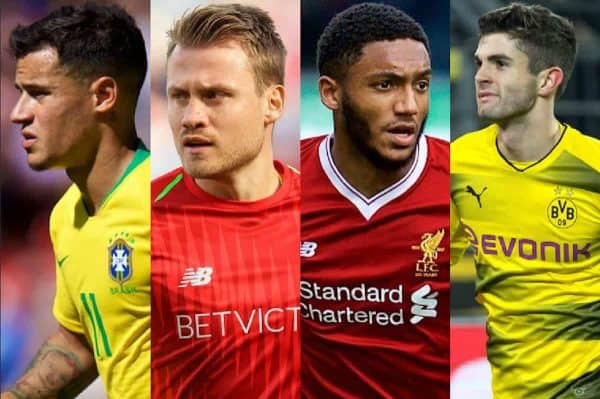 We round up the latest Liverpool news and transfer rumours on Wednesday, as preparation continues for Saturday’s Premier League trip to Watford.

Barcelona will not be able to buy a Liverpool player until 2020, as part of an “extraordinary” deal that helped Philippe Coutinho complete his move to Camp Nou, according to the Telegraph‘s Chris Bascombe.

The agreement was made when Coutinho moved to the Liga champions in January, eradicating fears that the likes of Mohamed Salah and Roberto Firmino could go the same way in the near future.

On top of that, Bascombe states that Michael Edwards “insisted on a €100 million (£89m) premium on top of any transfer fee if Barcelona try to lure any more Liverpool players in the next few years,” in a brilliant move by the sporting director.

The deal is described as being made due to Liverpool’s “distaste” with how Barcelona handled the Coutinho situation over a six-month period.

Mignolet to Stay Beyond January

Simon Mignolet will remain a Liverpool player until the end of the season, reports the Liverpool Echo‘s James Pearce.

The 30-year-old has made only one appearance for the Reds in 2018/19, finding himself as backup to Alisson.

Pearce says that Mignolet “is attracting interest from a number of European clubs including Nice,” who want to acquire his services in January.

That won’t be happening, however, with Jurgen Klopp “unlikely to entertain offers” for the Belgian in the next transfer window.

Liverpool’s new throw-in coach Thomas Gronnemark has told Mundial why Joe Gomez is so effective at them:

“We put most of the players at Liverpool through my training, at first at Melwood and then at the training camp in France, but I’m coaching all the fullbacks.

“What makes him a good thrower, he had learned most of the things I wanted to teach him about technique very seriously; he’s taken the training seriously.

“With Joe, it’s good technique but also a good physique.

“Joe’s throw is very dangerous because of the constant threat.”

Gronnemark’s comments come after Gomez played a key role in England’s 2-1 win over Croatia on Sunday, launching a bullet-like throw-in that led to Jesse Lingard’s equaliser.

Pulisic to Discuss Future in January

Recent reports suggest Christian Pulisic is set to move to the Premier League next summer, with Liverpool and Chelsea both strongly linked.

In an interview with NBC Sports, the American revealed he will talk to Borussia Dortmund about his future in January, once the Bundesliga reaches its winter break:

“I’m still focused on Dortmund. We are doing great this season.

“Once the break comes [in January], that is always when I will have to discuss with Dortmund and see about my future.”

Pulisic will cost Liverpool around £70 million if they are to make a bid next summer, but he would be another huge signing, both in terms of talent and marketability.

Critchley on “Invaluable” Experience For Youngsters

While Liverpool’s international players were off representing their countries, academy prospects were afforded the luxury of training with Klopp and a few senior players.

U23s boss Neil Critchley spoke to LiverpoolFC.com about how beneficial the experience could prove to be, as the youngsters look to progress in their careers:

“It’s invaluable for them to spend some time in front of the manager and his staff and the senior players.

“To have one, two or three training sessions with them is invaluable and is probably worth six months of coaching that I can give them.

“They will be better for those experiences but it’s also important that they take something from it and they learn from it.

“Don’t just go to Melwood to make the numbers up and be a passenger, show what you are about because it’s an opportunity that might not come around too often.

“They have to grasp it when it comes along.”

The fact that Klopp has blooded so many young players since becoming Liverpool manager, most notably Trent Alexander-Arnold, should give academy players that extra motivation to make the grade at Anfield.