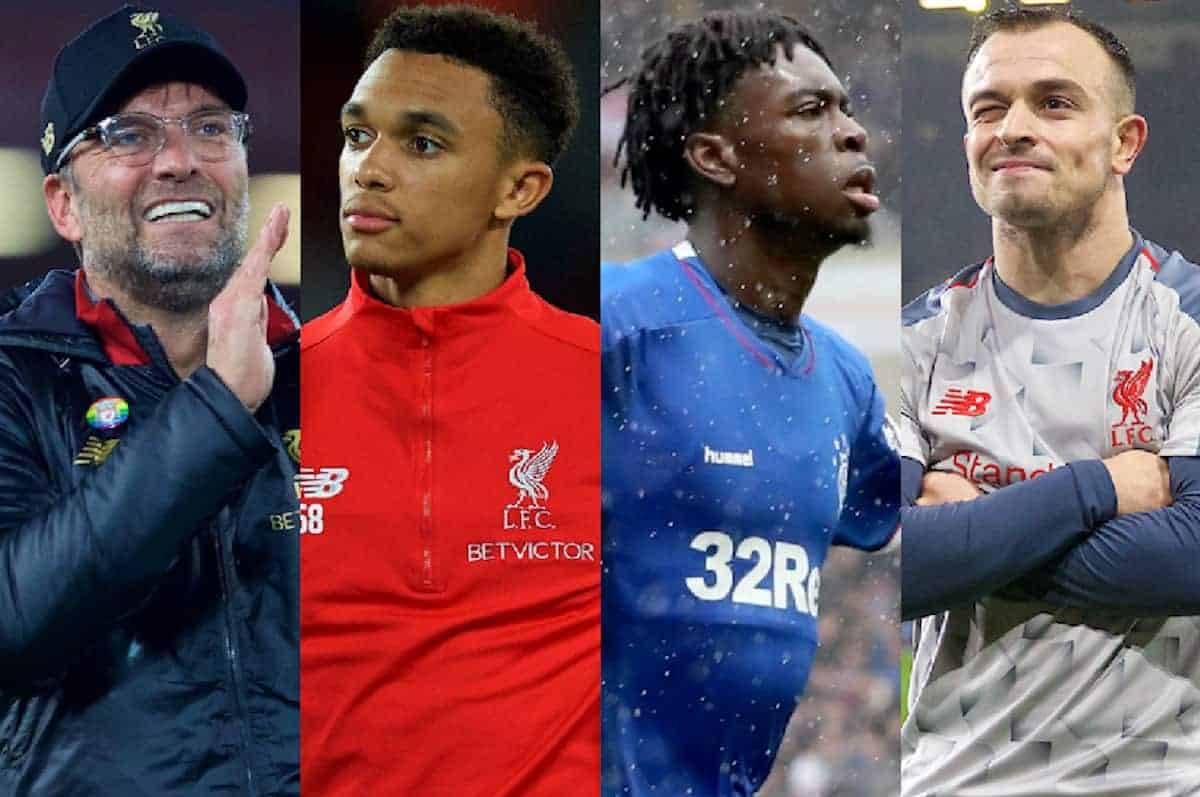 We round up the latest Liverpool news and transfer rumours on Monday, on a day full of Man United reaction and the Champions League draw.

Liverpool have been pitted against Bayern Munich in the last 16 of the Champions League, in what promises to be a special European clash.

Jurgen Klopp has given his thoughts on facing his former rivals at Borussia Dortmund, saying:

“Difficult. Good draw. It was clear it would be difficult [and] they are obviously a top side.

“For me it’s nice, going to Germany. But it’s just the draw. So we have now time to prepare the game, a lot of time obviously, and hopefully we have all our players available then.

“It will be a tough one, an interesting one, and I am looking forward to it.”

Klopp is flying at the moment, masterminding Liverpool’s Champions League progression and inspiring them to the top of the Premier League.

He will relish the prospect of potentially knocking out a club he doesn’t have a huge amount of time for.

Ovie Ejaria returned to Liverpool at the weekend, after ending his loan spell at Rangers prematurely.

Manager Steven Gerrard couldn’t hide his disappointment at the youngster’s decision but he told the Scotsman it was purely football-related, contrary to some reports.

“First and foremost I have to respect the kid and his privacy.”

“Am I disappointed he’s gone? Yes. Do I think it’s the right decision? No, because I think he had an incredible opportunity here.

“But I’m never going to stand in a player’s way who is not happy and who is not settled because I have people who are desperate to wear the shirt and who would run through brick walls to wear it. “I have to accept the decision. I’m sad about it,

“I wish him all the best. He’s a nice kid, very quiet. He told me it was 100 percent football reasons and I have to respect that.”

Ejaria is expected to return to Liverpool’s U23s for the time being, but he must be careful his career doesn’t stall at this point.

De Ligt is seen as one of the most exciting young players in the world, with a host of Europe’s top clubs monitoring his progress.

It is a proud moment for Alexander-Arnold nonetheless, considering how many great emerging players he finished ahead of in the award, handed to the best U21 player over the last 12 months.

The 20-year-old is currently sidelined with an ankle injury, but this runners-up spot will hopefully have perked him up a little.

Shaqiri In His Prime

Xherdan Shaqiri is riding on the crest of a wave after his match-winning showing against United on Sunday.

The Swiss believes he is entering the peak years of his career and is looking forward to future successes in a Liverpool shirt.

“I’m 27, my best age to perform at a high level, so I hope the best times are coming,” Shaqiri told the Liverpool Echo.

“Of course the style here has helped me, how they play, it’s for me too. I have to go on the pitch and perform and I have qualities to be in the team, to have an impact, to score goals, to give assists and decide games like this.

“I’m very happy at the moment with my performances.”

Shaqiri is proving to be a magnificent signing by Klopp, adding depth to the squad and bringing with him the winning mentality of a top international player.

Injured Woodburn Back At Liverpool

Ben Woodburn is set for a spell on the sidelines with an ankle injury and has returned to Liverpool, according to the Liverpool Echo.

The 19-year-old picked up the problem in a training session at Sheffield United, where he has suffered a disappointing loan spell this season.

He was at Anfield on Sunday on crutches and with his foot in a protective boot – Liverpool are still waiting to find out the severity of the injury.

It is the latest setback in frustrating campaign for Woodburn, who has started just one Championship game all season.

Reds Set For VAR Use

VAR will be used in Liverpool’s Champions League clash with Bayern in February – the first time it has been brought in in the competition’s history.

UEFA have brought forward proposals to use the technology in the knockout stages, having initially planned to bring it in next season.

A number of high-profile refereeing errors are thought to be a key reason for it, with the governing body keen to see big matches decided fairly.

It’s sure to be interesting, one way or another.