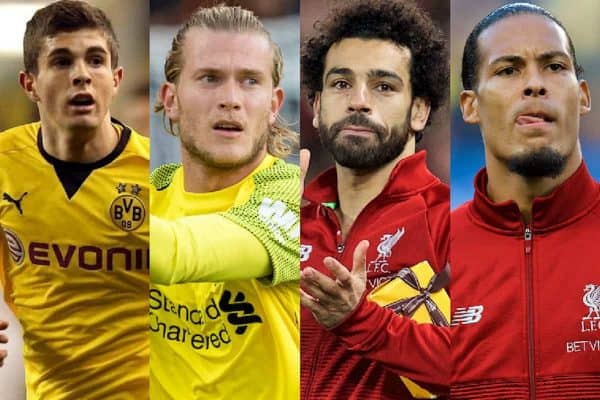 We round up the latest Liverpool news and transfer rumours on Monday, with Reds players and supporters still on cloud nine after a famous derby win.

Virgil van Dijk was a commanding presence yet again on Sunday, with the centre-back even managing a world-class assist!

The Dutchman’s magnificent form has been recognised, following the announcement that he has been named the Premier League‘s Player of the Month for November.

Liverpool conceded just once in the league during the month, as Van Dijk’s unbelievable influence shows no sign of abating.

Such is the magnitude of Van Dijk winning this award that he’s the first Premier League centre-back to be named Player of the Month since 2013.

According to the Evening Standard, Chelsea have made “their first official approach” for Christian Pulisic, although it is below Borussia Dortmund’s £70 million asking price.

The west London club are believed to have spoken to the 20-year-old’s representatives on Friday, with a view to a potential summer transfer.

Liverpool and Chelsea have been the two clubs hotly tipped to fight it out for the signature of the highly rated Dortmund forward.

He will have just one year left on his contract come the end of the campaign.

Let’s what the Reds’ next move is.

Karius To Return Next Summer?

Loris Karius‘ Besiktas career continues to divide opinion, with some of their fans critical of his performance in their 3-2 Europa League win over Sarpsborg last week.

According to Sport Witness, the Turkish club may be willing to let the German return to Liverpool at the end of the season.

That is despite Karius joining on a two-year loan deal in the summer, following his disastrous showing in the Champions League final.

Should that happen, there is a huge likelihood that the 25-year-old will be moved on swiftly, with his time at Anfield surely at an end.

As it stands, though, Besiktas have an obligation to buy the goalkeeper if he meets pre-agreed appearance targets.

The general consensus was that Mohamed Salah struggled against Everton, especially after being replaced by Daniel Sturridge with 15 minutes left.

The statistics suggest otherwise, however, as analyst Andrew Beasley pointed out in the Liverpool Echo.

Liverpool’s No.11 actually created four chances at Anfield, which he has only bettered twice in his 49 Premier League appearances for Liverpool.

He also made two clear-cut opportunities for teammates—just the fifth time a Reds player has achieved such a feat this season.

Are the stats masking a subdued display or are we simply expecting too much from Salah?

Liverpool could barely have left it any later to beat Everton, with Divock Origi‘s freakish 96th-minute header sealing a precious victory.

Speaking to Liverpoolfc.com, Andy Robertson believes the Reds’ refusal to ever give up proved key, as they stayed two points behind leaders Man City:

“We knew we were coming up against a different Everton side. I know the manager well. They played really well. But this team… we just don’t give up. We’ve gone to the end.

“I’m sure there’ll be a few tired bodies but it’s well deserved and it’s all worth it when you go home and you’re sitting with your family with three points in the bag.

“Man City had the benefit of playing first this week and we knew they had won, so we didn’t want them getting too far in front. We stay right on their tails – another massive win for us.”

England and the Netherlands have been drawn against each other in the semi-finals of the UEFA Nations League.

The finals of the newly formed international tournament will be held in Portugal next June, with numerous Liverpool players likely to be involved.

Trent Alexander-Arnold, Joe Gomez and Jordan Henderson are all expected to be in Gareth Southgate’s squad, with Van Dijk and Gini Wijnaldum representing Holland.

Meanwhile, Xherdan Shaqiri‘s Switzerland will face Portugal in the other semi-final.

It should be an interesting watch—or at least a way of passing the time before pre-season begins!