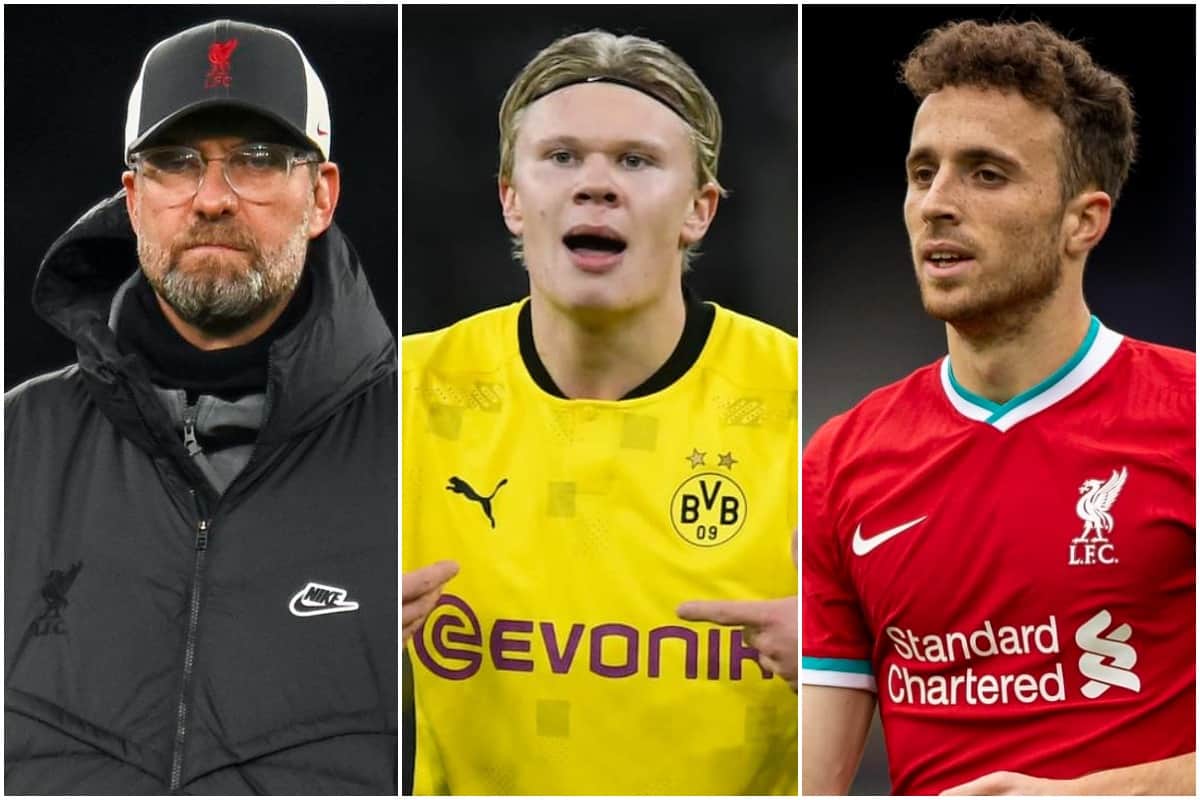 Liverpool have no game ahead for most of the next three weeks, which is our way of saying to you: prefer for some wild, wacky and potentially annoying rumours.

Klopp willing to swap a forward for Erling

Let’s start with one of the two big strikers who will dominate summer headlines: Erling Haaland.

He – and Kylian Mbappe – will be relentlessly linked with the Reds until one of two things happen: he signs elsewhere, or he leans on a wall at Kirkby. Do we have a leaning spot at Kirkby yet? Hopefully that’s something in the works for summer. Iconic.

Anyway, whether or not you think the Dortmund striker will be rocking up on Merseyside, Mundo Deportivo are pretty sure we want him to.

They say Klopp has put him front and centre of plans for a “big rebirth” and he’s even willing to give up one of Firmino, Salah or Mane to make it happen.

Naturally, every other big clubs’ claims are put forward to, just to confuse matters and allow them to say ‘Ha! We were right!’ when the relentless goal-getter eventually transfers anywhere at all.

Liverpool will have a fair few players around during the break, with the Brazil trios’ games postponed and the usual batch of non-internationals still in training.

But Thiago Alcantara has already been selected by Spain and Trent Alexander-Arnold is likely to follow suit when England’s squad is announced on Thursday.

On Tuesday, two more got the nod: Andy Robertson was of course named as Scotland captain, while Diogo Jota is in the squad for Portugal.

The latter nation has just been removed from the UK’s travel restrictions list, so he won’t have to quarantine for 10 days (or be withdrawn from the squad!) when he gets back.

And yes, they face three games each in the World Cup qualifiers.

A league win and progress in Europe – just the tonic needed to head into this break with. What comes next?

Good news of the day

“He’s conscious, he’s aware and he remembers what happened. The assessment is positive – he’s going to be OK.”

Nat Phillips and Ozan Kabak have now played the third most minutes by any Liverpool CB partnership this season.

They've kept three clean sheets out of three in their full matches, and the only goal they've conceded was a penalty.

What we’re intrigued by

A long way down the road with many speed bumps to navigate – UEFA and TV deals are just two – but it’s interesting even so that 25 Belgian clubs have voted in favour of merging their league with the Dutch Eredivisie.

Big moment in Belgian football, as 25 professional clubs vote in favour of establishing Beneliga = a merger with Dutch Eredivisie. @ProLeagueBE to play 'active role' in the project. Domestic TV deals end in 2025 in both ?? and ??

Real Madrid vs Atalanta is far from decided in the Champions League last-16, second leg.

Liverpool 2-0 Southampton – As it happened