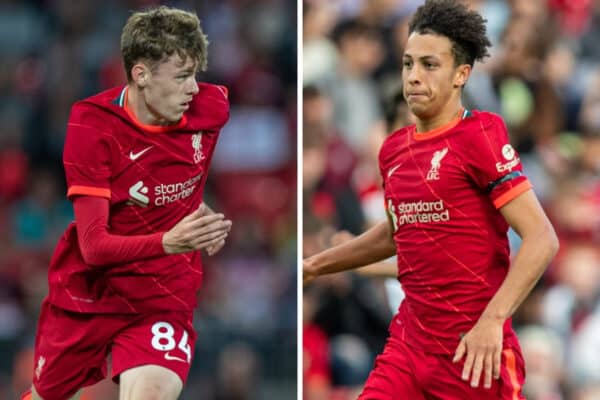 The Liverpool squad returned to Kirkby for training on Wednesday, with Jurgen Klopp keeping three of his pre-season youngsters as part of preparations for Norwich.

Saturday brings the start of the new campaign for the Reds, with a trip to Carrow Road their third consecutive opening-day clash with the winners of the Championship.

Klopp has a variety of options for his starting lineup, with only Andy Robertson and Curtis Jones ruled out due to injury, and has already revealed that both Virgil van Dijk and Joe Gomez are in contention.

There are unlikely to be many surprises when Liverpool’s teamsheet is released, but the manager has kept three youngsters on board after impressing in pre-season.

Owen Beck, Conor Bradley and Kaide Gordon were part of the initial 34-man squad to travel to Austria a month ago, with Bradley then dropping out for the trip to France before rejoining the group for their Anfield friendlies.

All three were part of first-team training at Kirkby on Wednesday, suggesting they will stay in the senior setup for the season ahead.

Beck, 19, and Gordon, 16, were regular features throughout the pre-season friendlies, both making the maximum of five appearances across the eight friendlies, while Bradley, 18, was used twice due to more competition at right-back.

With Robertson currently sidelined, Beck could come into the thinking as part of Klopp’s matchday squad, while Gordon’s start ahead of Divock Origi in the 3-1 friendly win over Osasuna indicates that he could be considered too.

Other academy players involved with the squad were Ben Woodburn, Jake Cain, Leighton Clarkson and Marcelo Pitaluga, though they are already full-time members of the group.

Absent were Mateusz Musialowski, Tyler Morton, Billy Koumetio and Harvey Davies, having returned to the academy ranks after first-team exposure over the past month.

Adrian was also back in training having been mysteriously missing from the squad against Athletic Club and Osasuna, but neither of Nat Phillips or Xherdan Shaqiri were involved.