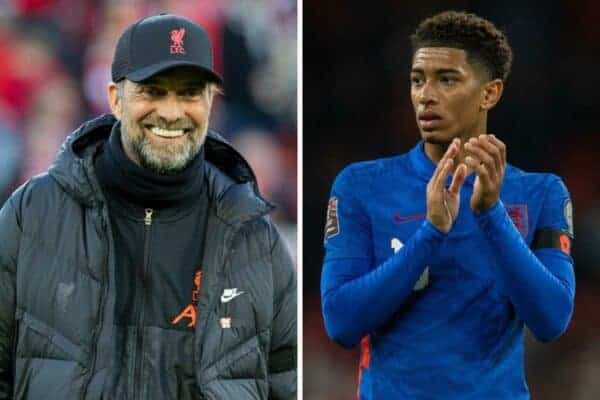 Liverpool journalist claims midfielder won’t be signed until NEXT summer

Despite reports linking Liverpool with Real Madrid-bound Aurelien Tchouemeni, a reliable source has claimed that a new midfielder will not be signed this summer.

Instead, the Reds are expected to prioritise a new addition in the middle of the park this time next year.

That is according to the Times‘ Paul Joyce, in an expansive update on the pursuit of Benfica striker Darwin Nunez and Aberdeen right-back Calvin Ramsay, as well as the club’s pre-season plans.

While Nunez is closing in on an £85 million transfer and talks are ongoing over a move for Ramsay, Joyce claims that “it is likely that a midfielder will be targeted next summer.”

This comes following the news of Tchouameni’s big-money switch from Monaco to Real, with the Spanish club confirming a deal worth around £85 million for the young Frenchman.

Tchouameni had been reliably linked with Liverpool throughout the early months of the summer, but it was maintained that Real held the upper hand.

Now that move has been concluded, the public stance is that the Reds will not seek an alternative in the current transfer window.

It would rule out a proposed move for PSV Eindhoven’s Ibrahim Sangare, as well as speculation over Sporting CP’s Matheus Nunes, who has also been linked with Wolves.

But any decision to delay the pursuit of a midfielder would coincide nicely with the expected departure of Jude Bellingham from Borussia Dortmund.

Dortmund are unlikely to allow Bellingham to leave in the same summer as Erling Haaland, who has already been unveiled as a Man City player, but the England international appears destined for the exit in the near future.

Another season at Dortmund would allow the 18-year-old to continue his development outside of the Premier League bubble, positioning himself for a first-choice role at a top club back in England.

The Athletic‘s Laurie Whitwell has already described Bellingham as being “top of Man United‘s wishlist” but added that “any approach would be next summer.”

But Liverpool have also been reliably credited with “significant interest” in the teenager, not least from the Times‘ Joyce, who is seen as one of the leading journalists on Merseyside.

This was followed up by reports in Germany, while Dortmund sporting director Sebastian Kehl confirmed interest from Anfield back in October.

“I’ve got nothing but good things to say about him,” Jordan Henderson, who has grown close to Bellingham during their time together with England, said in March.

“He’s a great lad, a fantastic player and I’m sure he’ll go from strength to strength as he gets older and matures.

“When I watch him, he plays with such maturity even now. The sky is the limit for him really.”