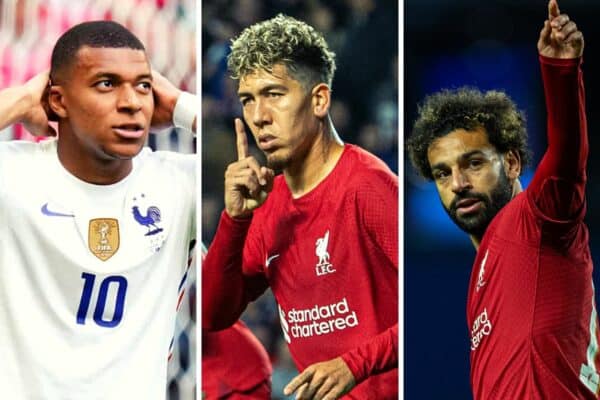 Today’s Liverpool news round up includes news on Roberto Firmino‘s contract situation as well as the latest on suggestions that Kylian Mbappe could be interested in a move to Anfield.

Could Bobby stick around after all?

It was widely expected that this would be Firmino’s final season at Liverpool – a bit-part role before an exit on a free transfer next summer.

But with eight goals and four assists already to his name this season, is Bobby making a case for a new contract?

According to GOAL’s Liverpool correspondent Neil Jones, it remains “possible” that Firmino could extend his stay at Anfield beyond this season.

When asked if the club’s owners “were done” with the idea of not offering Firmino a new deal, Jones told The Redmen TV:

“I don’t think they’re done, I think everything’s still possible in regards to it.”

Jones was also quizzed on whether there was any possibility of Kylian Mbappe joining the club, amid reports he wants to leave the club in January.

“It’s really hard to see Liverpool getting anything together to get Kylian Mbappe,” he continued.

“Jurgen spoke about it at the start of the summer and said that the figures are just not possible.”

Who needs Mbappe when Bobby’s in this form, anyway?!

Time to heal. I’m so grateful for all the support and I will be back soon x ? pic.twitter.com/iM9hSF60AT

Bobby proving he’s a class act both on and off the pitch.

Or, you could rewatch the second half from Ibrox last night.

That’d be a much better idea.