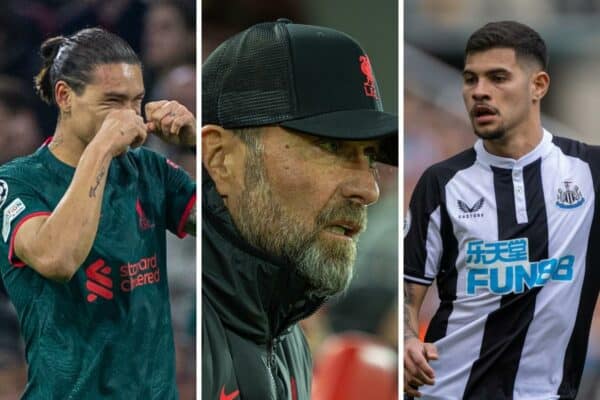 A Liverpool win in Europe makes work the next day easier, doesn’t it? We’ve got the latest on supposed ‘interest’ in Bruno Guimaraes as well as an update on Jurgen Klopp‘s red card punishment.

You’d be hard-pressed to find someone who didn’t think Liverpool needed midfield reinforcements in the summer. Eventually, the club took action and signed Arthur, however, the Brazilian has played 13 minutes for the first team and is currently out with a long-term calf injury.

Reports from South American outlet TNT Sports suggest that Liverpool are ‘interested’ in another Brazilian midfielder, Guimaraes of Newcastle.

Since arriving from Lyon for £37 million in January, the 24-year-old has been a revelation for the Magpies and, according to TNT, Real Madrid, Chelsea and Liverpool have all expressed “concrete interest” in making a move next summer.

“Many top clubs are interested in signing Bruno in 2023 but Newcastle want to keep him.”

With Thiago a doubt due to an ear infection and Fabinho out of form, Klopp would surely wish he had Guimaraes in his squad to face Leeds – getting him before Newcastle would’ve been cheaper too!

Fortunately for the Reds, Klopp will be in the dugout on Saturday night after he avoided a touchline ban for his reaction to Bernardo Silva’s tackle on Mo Salah against Man City.

He has instead been fined £30,000 and accepted the charge for improper conduct.

3 things today: Hendo’s book is out!

My autobiography is out now online and in stores! ? hope you all enjoy it! ? pic.twitter.com/usTf9f44az

This is how watching the match on TV could look very soon!

Premier League set for TV revolution with plans to introduce real-time graphics and data into its broadcasts on Sky Sports and BT Sport ?

Thursday nights are Europa nights so there’s plenty to get stuck into as Hearts, West Ham, Man United and Shamrock Rovers are all in action.

My pick is back in the Netherlands though, as Arsenal travel to PSV Eindhoven in the Europa League.