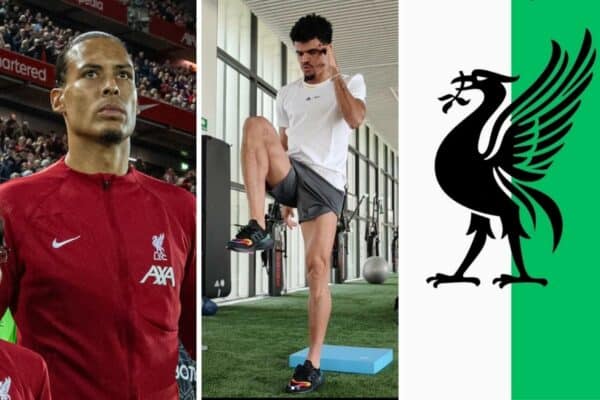 Liverpool’s final away game before the World Cup is just days away but Thursday’s focus is on next season’s kit colours, Luis Diaz‘s recovery and a deserved ban for a Leeds ‘fan’.

Seven games have passed since Diaz suffered a serious knee injury at Arsenal, an absence that has left Liverpool short in attack after Diogo Jota followed him into the treatment room.

Diaz’s recovery started in earnest and with his return still a long way off, there is hope he can be involved somewhat in the training camp in Dubai, he has returned to his native Colombia.

Colombian journalist Pipe Sierra, who broke the Diaz to Liverpool news, provided an update on his rehab, which is currently taking place at the Colombia national team headquarters in Barranquilla.

? Luis Díaz is training and following the recovery protocol at the headquarters of Colombia National Team in Barranquilla. The winger came to the country for a holidays period ?

? Most of the recovery and readaptation process will be done in Liverpool pic.twitter.com/lJRpUaCV7b

It is where he got his start in football and he will combine his recovery with some rest in a familiar setting before making his return to Liverpool.

It is a recent development with Diaz having posted an update from the AXA Training Centre over the weekend.

The 25-year-old is still required to wear a knee brace and is starting the process of strength and resistance work on his left knee.

It’s a Thursday night and that is reserved for Europa League action – which includes Arsenal vs. Zurich, Real Sociedad vs. Man United and Feyenoord vs. Lazio.

There’s plenty to pick and then flick if the one you settled on isn’t entertaining.