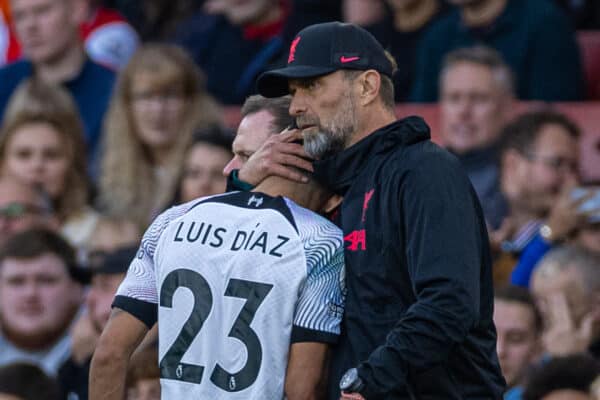 Having initially returned to training when Liverpool first arrived in Dubai earlier this week, Luis Diaz‘s fresh injury problem has been described as “a proper smash in the face” by Jurgen Klopp.

The Liverpool boss was speaking after his side were beaten 3-1 by Lyon as they returned to action in Dubai.

Many were pleased that the mid-season break for the World Cup initially meant that Diaz would only miss a handful of Liverpool matches.

But with reports in Colombia claiming the winger is set to undergo surgery and could be sidelined until March, Diaz looks set to miss some key Liverpool games in the coming weeks and months.

Klopp is yet to place a timescale on the 25-year-old’s recovery, but speaking to reporters on Sunday, said the injury was “a big disappointment.”

“Yeah, he was not in the best possible place,” Klopp said in his post-match press conference.

“It’s clear it’s a big disappointment for all of us, for him as well.

“It was a non-situation in training, honestly – nothing, felt something. [He] didn’t feel a lot next day but we wanted to be really cautious and said, ‘OK, come on, let’s have a look.’

“Yeah, then the news came and it was a proper smash in the face. But that’s it now.”

Should he be sidelined until March, Diaz could miss up to 17 Liverpool matches, including the first leg of their Champions League tie against Real Madrid.

With reports stating Diogo Jota won’t be available until February himself, Liverpool find themselves short of natural left-sided attackers, with Fabio Carvalho filling the role against Lyon.

Darwin Nunez was used in that position prior to the break, with the Uruguayan due to reconvene with his Liverpool team-mates in Dubai on Monday.

Elsewhere, Klopp has also provided an update on the fitness of Harvey Elliott, after the midfielder was withdrawn in the first half against Lyon.