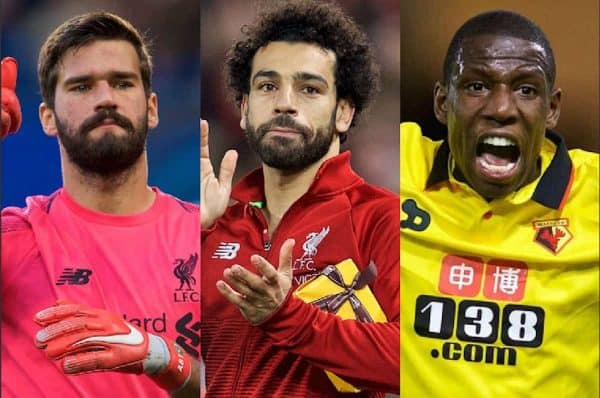 We round up the latest Liverpool news and transfer rumours on Wednesday, as we edge closer to the weekend trip to Arsenal.

Liverpool may be joint-top of the Premier League but there is a feeling that they are yet to properly fire this season.

Alisson has echoed that sentiment, telling Liverpoolfc.com that improvements can be made, despite such a positive start to 2018/19:

“We know we can improve on the pitch and I think that’s a positive thing, taking into account the campaign we’ve had up until now – joint-leaders with Man City – and there is still room for growth, both technically and tactically.

“That’s our biggest challenge: to continue growing and continue to get better, so when other clubs maybe have a dip or have peaked, we can continue getting better and doing our best on the pitch.”

The Brazilian is yet to be consistently tested in the Liverpool goal, but the weekend clash with Arsenal is likely to be one of the biggest examinations of his credentials yet.

Mohamed Salah is in the running for this year’s Ballon d’Or, although Liverpool’s No.11 is expected to lose out to either Luka Modric or Cristiano Ronaldo.

Ronaldo sees Salah as somebody to rival him for the prestigious award moving forward, but has challenged him and others to stay at the top for a decade, like he and Lionel Messi have done.

“The same as usual, even if I don’t know if Messi will be on the podium this time,” said Ronaldo, when asked about this year’s contenders.

“So, let’s say Salah, Modric, Griezmann, Varane, Mbappe – the French in general because they are world champions.

“But I will wait and see if all these players are still at the top in 10 years, like Messi and I have done, and like we continue to do.

“Still there, on the podium, since more than 10 years.”

Salah is certainly someone who who has the ability be at the top of world football for years to come, but matching Ronaldo and Messi’s feats would be a superhuman effort.

The 24-year-old has emerged as one of the most influential players outside the Premier League‘s ‘big six’, with his performances helping the Hornets to seventh in the table.

PSG are also said to be keeping tabs on the impressive Frenchman, with a move back to his homeland potentially appealing.

He could head to Paris as a replacement for Adrien Rabiot if he departs, with the soon-to-be out-of-contract midfielder linked with a move to Merseyside.

Ex-Liverpool midfielder Mark Walters has heaped praise on Jurgen Klopp‘s team, in an interview with the Liverpool Echo.

He believes the new-look defence is a key reason behind their unbeaten start to the season and hopes the title drought ends next May:

“This Liverpool team are so exciting to watch. They’ve always been like that under Klopp but now they have shored things up at the back. As a team they look so solid and they play some great football too.

“With the progress Klopp has made and the signings which have given them more strength in depth, without doubt they have a great chance of winning the league this season.

“There’s so much talent in that front three of Mo Salah, Sadio Mane and Roberto Firmino. It’s so difficult to defend against that pace. Then he’s got players like Daniel Sturridge to come on and watch a difference.

“When I was at Liverpool, the league title was the Holy Grail. Unfortunately nearly 30 years later we still haven’t won it. Hopefully this is the year that changes.”

This is surely the best Reds team of the Premier League era, with only Rafa Benitez’s class of 2008/09 and Brendan Rodgers’ 2013/14 outfit rivalling it.

It’s fair to say Adam Bogdan’s Liverpool career has been a forgettable one, with the Hungarian making just six first-team appearances since joining from Bolton Wanderers in 2015.

Incredibly, the on-loan Hibernian goalkeeper is still on the books at Anfield, but he accepts his time there has effectively run its course.

“I am still a Liverpool player but it is running out,” Bogdan told the Scotsman.

“I am considering myself more a Hibs player. In my head unless some crazy thing happens the contract will run out.”

According to “sources” of ESPN‘s Glenn Price, Partizan Belgrade will allow Liverpool the use of their training facilities ahead of their Champions League clash with Red Star Belgrade next Tuesday.

The report states that the Reds will undergo a light training session at the Partizan-Teleoptik complex on the morning of the game.

This is, of course, fairly standard procedure when playing in Europe.

Next Tuesday’s match is another crucial one for Klopp’s men, with victory essential in terms of staying top of Group C and keeping both Napoli and PSG at bay.

It is Liverpool’s first trip to Red Star since 1973 and a hostile atmosphere is sure to await them.

Reminder that that game is an earlier kickoff, 5.55pm in the UK.