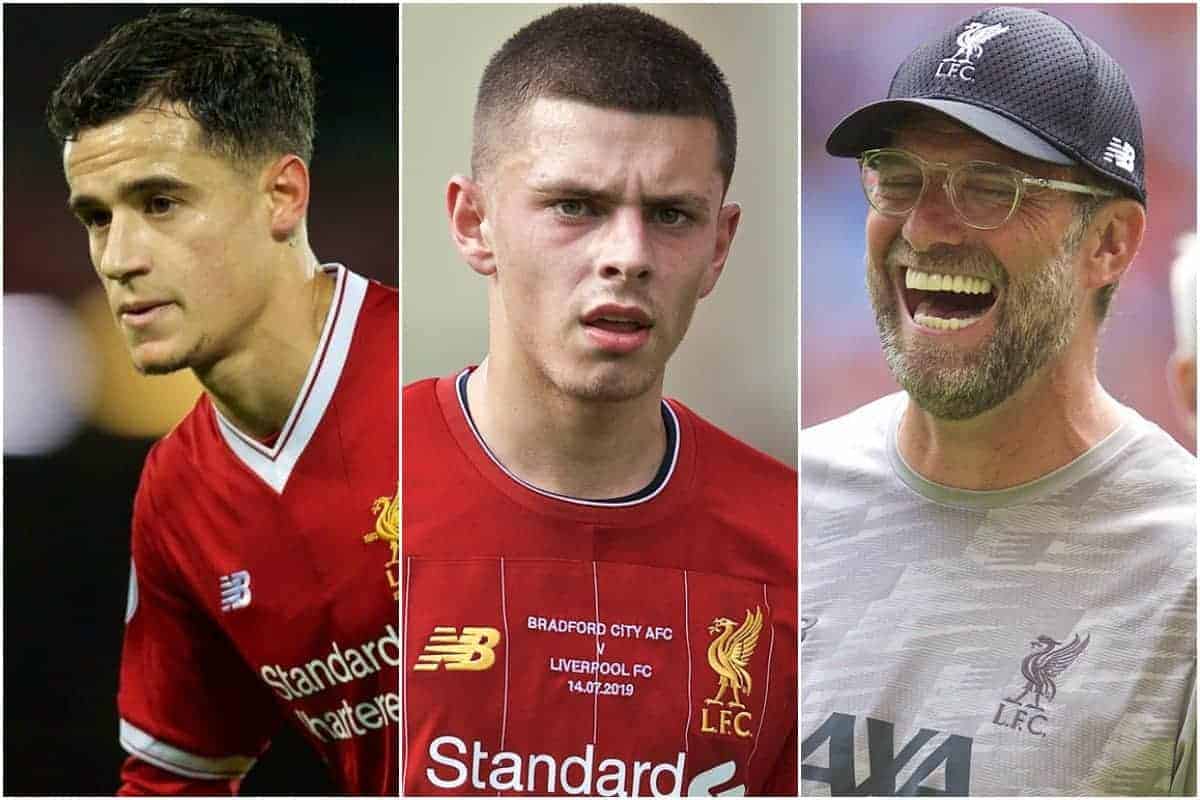 We round up the latest Liverpool news on Monday, as Jurgen Klopp and his players begin to turn their attentions to the weekend visit of Arsenal.

When Philippe Coutinho moved from Liverpool to Barcelona in January 2018, who else envisaged him being shipped out on loan in the space of 19 months?

The Brazilian’s “dream” switch has turned into a nightmare and having been deemed surplus to requirements, Bayern Munich have snapped him up on a temporary basis.

According to the Evening Standard‘s David Lynch, Liverpool will only miss out on £4.5 million because of Coutinho’s switch to Germany.

The 27-year-old’s poor spell at the Nou Camp has “had little effect on the size of the fee received by Liverpool for his transfer.”

Liverpool were guaranteed to receive £111 million of the £146 million Barca paid for Coutinho’s signature, with the rest made up of “realistic add-ons”.

It is, therefore, expected that the Reds will make a cool £141 million from the sale of their former No.10.

Adam Lewis was talked up as a possible deputy to Andy Robertson this season, but Yasser Larouci appears to have jumped ahead of him in the pecking order.

According to Football Insider, League One side Tranmere Rovers are eyeing up a loan move for the left-back “in the final 11 days of the lower league window.”

In many ways, a switch to Prenton Park would make perfect sense, providing Lewis with the challenge of first-team football at senior level.

It’s also just a quick ferry ride across the River Mersey, allowing Liverpool to keep a close eye on his progress.

Although nothing is concrete yet, Football Insider‘s Pete O’Rourke was correct in reporting Corey Whelan’s move to US side Phoenix Rising earlier this summer.

The attacking unit of Mohamed Salah, Sadio Mane and Roberto Firmino should now be considered one of Liverpool’s greatest of all time, as they continue to wreak havoc every week.

It was Mane and Firmino’s turn to take centre stage at Southampton on Saturday, with a goal a-piece.

Speaking to LiverpoolFC.com, Klopp gushed about the trio, saying it is a joy to manage such special players:

“A lot of times in my life I had sensational players always [but] not world-class players. Now, thank God I have them and they make the difference. We don’t have to talk about that.

“They were a constant threat, however tired they are. That’s brilliant and, of course, made the difference. We don’t have to talk about that.”

Next up for Salah, Mane and Firmino is Arsenal at Anfield on Saturday – a fixture that saw them score five goals between them last season in a 5-1 win.

Adrian‘s howler could have cost Liverpool dearly on Saturday, but fortunately the Reds held on against Southampton.

Gini Wijnaldum isn’t worried about the Spaniard, though, saying that his reaction to the mistake is more vital than anything.

“Those kind of things can happen with a goalkeeper. Last season it happened to Alisson against Leicester City and in a pre-season friendly,” said Wijnaldum.

“How is he [Adrian] going to react to the mistake? I think that is more important than the mistake itself.”

The Dutchman also spoke about Adrian getting used to his new surroundings, saying: “Everyone needs time to adjust. He is just in for, not even two weeks, so we have to get used to each other.”

Alisson‘s absence was clearly felt on Saturday, but it shouldn’t be forgotten that Adrian also made a couple of important saves.

He is a sizeable step down from the Reds’ world-class No.1, but he should improve over time.

Arsenal were destroyed at Anfield last season, as has been the case a number of times during the Klopp era, and even before it.

In an interview with Sky Sports, manager Unai Emery admits he isn’t cherishing the prospect of facing the Reds, but says it’s a great challenge for his team:

“That is really our challenge, a good test. For the supporters, for all of us, going there with six points is good. Really our target is to reduce the distance to Liverpool, Man City, Tottenham and Chelsea.

“When we play against them it is a big challenge to show how we can be. Next week is going to be a very good match.”

It promises to be a thrilling encounter at Anfield on Saturday, with goals to be expected between two of the country’s most dangerous attacking sides.

Liverpool will need to improve defensively if they are to keep out the likes of Pierre-Emerick Aubameyang, Alexandre Lacazette and Nicolas Pepe.

Harry Wilson enjoyed a dream start to his Bournemouth career on Saturday, scoring in the Cherries’ 2-1 win at Aston Villa.

The 22-year-old’s impact did not go unnoticed by Klopp, with the German’s brilliant man-management revealed after the game.

The Telegraph report that Wilson received a fitting WhatsApp message from the 52-year-old on Saturday – “a ‘selfie’ photograph of him clenching his fist with a short message of congratulations”.

It perfectly sums up the Liverpool manager as a character, with his delight so genuine when a loanee excels away from Anfield.

Wilson may never end up making the grade with the Reds – equally, he may still be in Klopp’s long-term plans – but gestures such as these will do his confidence the world of good.