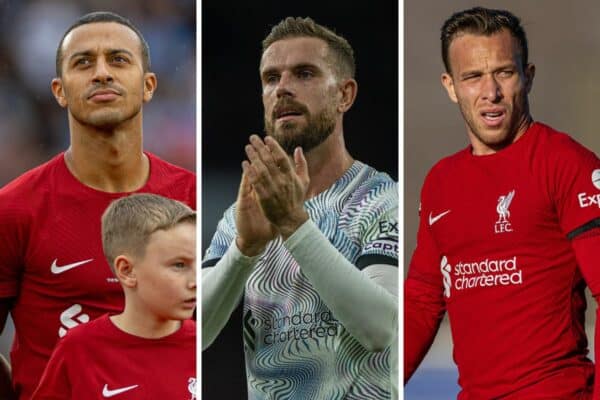 In today’s Liverpool news round up, there’s news of what was really said between Jordan Henderson and Gabriel Magalhaes, as well as a positive injury update from Jurgen Klopp.

What Henderson is believed to have said to Gabriel

Earlier this week came the news that Henderson would not face any further action from the FA following the incident that took place between him and Gabriel towards the end of Liverpool’s 3-2 defeat to Arsenal.

The exact nature of the complaint has never been disclosed but it has created damaging allegations in time between the match and the FA’s statement.

However, reports today have shed some more light on the situation, with the Daily Mail‘s Martin Samuel explaining why the FA dropped the case.

According to Samuel, Henderson is said to have told the FA that he called Gabriel a “f*cking idiot,” with Gabriel believing the Reds’ captain used “another far worse word in Portuguese.”

Henderson, of course, does not speak Portuguese, and it would appear that the Arsenal defender misheard what had been said.

Liverpool will be relieved to see the investigation come to a conclusion, as well as the one looking into Klopp’s behaviour towards the referee and his officials in the victory over Man City.

Neither Henderson or Klopp will face a ban of any kind.

3 things today: Thiago is back!

Tweet or video of the day and match of the night

Love the finish, love the celebration. Harvey really is going from strength to strength this season!

What a finish, Harvey ? pic.twitter.com/L6sIZ9kQ8f

Birmingham take on Mick Beale’s impressive QPR side in the Championship tonight.

Remember, Liverpool’s under-18s are in action against Wolves tomorrow, before the first team’s clash with Leeds at Anfield in the evening. Enjoy the weekend, Reds!