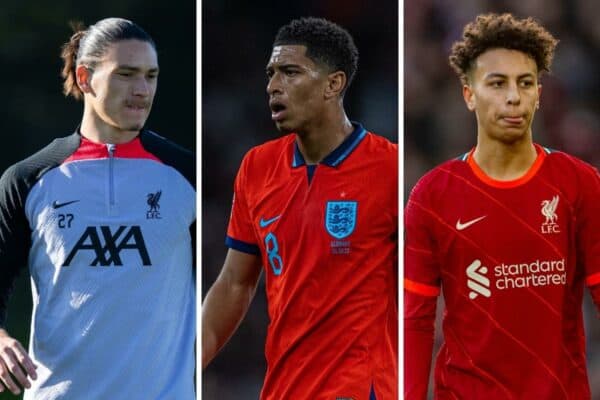 Jude Bellingham and Liverpool are back on the news agenda, while the Reds have been boosted by the training return of three senior faces on the eve of the clash at Ajax.

There’s not a week that goes by without someone making reference to Liverpool and Jude Bellingham, with the 19-year-old certainly on the wishlist for next summer.

But the Reds are not alone there, with a long line of suitors waiting in the wings for a final indication that he will move on.

Liverpool and Real Madrid have been toward the top of that list and the Telegraph‘s Jason Burt has now reported that the Reds, the once “early front-runners,” now “appear to be losing ground.”

Man City will want to be in the discussion and Madrid “have made their play” by outlining what he could expect, with the teenager recently discussing his eagerness to win silverware.

He will demand a sizeable fee and the Times‘ Paul Hirst states that Liverpool are “admirers” but “it appears unlikely that they would be willing to pay Dortmund’s asking price, which is set to be more than £100 million.”

The fee for Bellingham will not come as a surprise to Liverpool and having put off their plans to sign a midfielder this past summer, they know a premium awaits in 2023.

It would be typical that the club choose to wait for their man only for another to swoop in and take him away, but there is a long way to go and he will not be the only player on their target list.

There’s no escaping Liverpool’s need to bolster their midfield ranks and only time will tell if Bellingham arrives to do just that.

3 things today: Nunez and Konate BACK in training

Sad to see @PMullin7 getting it in the neck for echoing what the entire island is thinking right now. He is more on the pulse than most sportsmen.
You literally had officials visit foodbanks recently (whos existence is necessary because of our Govt!) ? https://t.co/T35L2W5CLI pic.twitter.com/2W43rIiFE2

Here’s hoping Naby lad is back on the pitch before long!

It’s the start of another Champions League night and that includes Borussia Dortmund vs. Man City and Leipzig vs. Real Madrid – both kick off at 8pm (UK).

But Jurgen Klopp is also fronting the media tonight (7pm) as he previews the clash at Ajax on Wednesday, This Is Anfield will have all the updates.