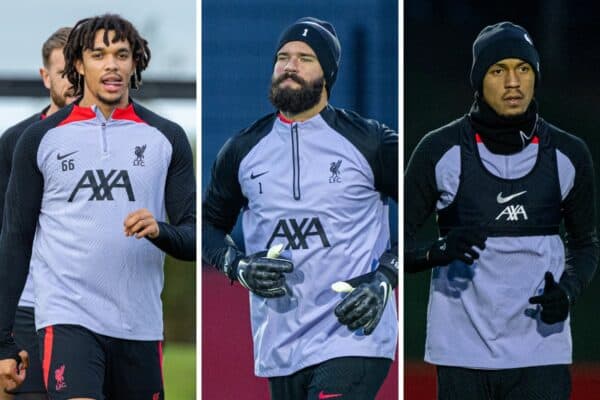 Alisson, Fabinho, Trent Alexander-Arnold and Jordan Henderson were all pictured back in training with Liverpool on Monday, ahead of the Reds’ clash with Man City later this week.

Several of the Liverpool players who crashed out of the World Cup quarter-finals returned to training on Merseyside today.

Brazilian duo Alisson and Fabinho are both back, as are Alexander-Arnold and Henderson. Virgil van Dijk, however, looks to have been granted more time off.

All four should now be in with a chance of featuring in Thursday’s Carabao Cup fourth round tie against Man City.

Darwin Nunez, who joined up with the Liverpool squad in Dubai this time last week, will certainly be available, with Jurgen Klopp all but confirming he will start before he netted twice in the Reds’ friendly against AC Milan on Friday.

After that game, Klopp also suggested that Virgil van Dijk will not play a part, but you would hope that he will return in time to be available to play against Aston Villa on Boxing Day.

Ibrahima Konate, meanwhile, is now likely to be granted at least a week off after France’s World Cup final defeat to Argentina, meaning he is most likely to make his return against Leicester on December 30.

Calvin Ramsay, who missed some training sessions in Dubai last week and was not part of the squad to face Milan, also returned to training, but Curtis Jones remains out.

A stoppage time strike from Sadio Mane won us the Merseyside derby ? pic.twitter.com/tHh6HFuHts