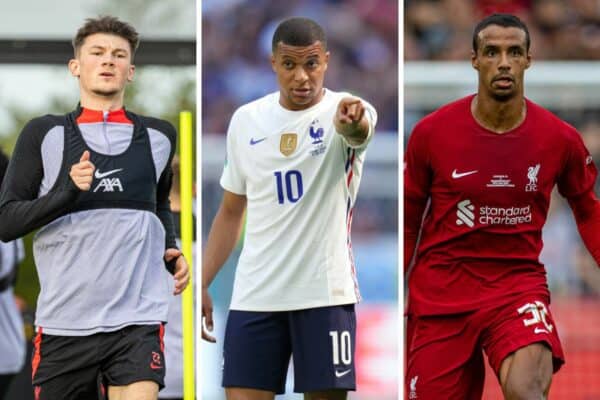 Tuesday’s Liverpool news round up includes some bizarre claims linking Kylian Mbappe with a move to Liverpool, as well as two fresh injury concerns in Jurgen Klopp‘s squad.

You thought the Mbappe saga was over after he signed a new PSG contract in the summer? You thought wrong!

Widespread reports on Tuesday claim the Frenchman “feels betrayed” by the Ligue 1 champions and wants to leave the club in January.

Where do Liverpool come into this? Well, Marca‘s Real Madrid correspondent Mario Cortegana has reported that PSG would only sell Mbappe to the Reds, despite the forward’s dream to play for Real one day.

The report claims Carlo Ancelotti’s side are not interested in signing Mbappe as things stand, leaving Liverpool as his only possible destination should he choose to push for a transfer next year.

What to make of this? We’d urge you to take the Liverpool links with a pinch of salt.

There are plenty of reliable reporters running the story that Mbappe has become disillusioned at PSG, and while that may be the case, Liverpool would surely not be able to afford a player who is said to be earning a £44 million salary.

Mbappe admitted he spoke to Klopp when weighing up his options last season, but things have changed a lot since then, not to mention the fact the Reds have only won two of their eight Premier League games so far this season.

A club that could realistically be in the running to secure the signature of one of the very best players on the planet? Probably not right now.

Champions League action tonight, Man City take on Copenhagen in one of the early kickoffs, Chelsea face Milan at San Siro and future Liverpool legend Kylian Mbappe could be in action for PSG at home to Benfica!

Klopp’s pre-Rangers press conference is due to take place at 7.30pm (BST) in Glasgow. Stay with us for updates!