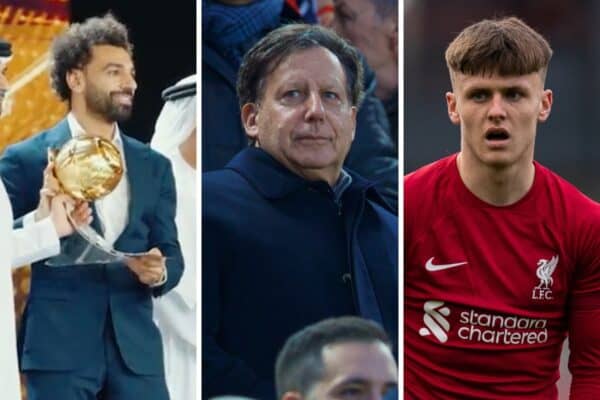 Liverpool’s chairman has confirmed they’re “exploring” the sale of the club, Mohamed Salah‘s trophy collection just got a bit bigger and Jordan Henderson eulogised about Jude Bellingham to an ex-Red.

Liverpool chairman and FSG founder Tom Werner has confirmed that they are “exploring a sale” for the club, but was quick to say that “there’s no urgency” on the matter.

News of FSG putting the club up for sale emerged 11 days ago and we continue to discover more as time ticks by, with Thursday relaying the news that there has been “a lot of interest” in the club.

The same source, Boston Globe, which is owned by John Henry, has since brought forward quotes from Werner, who is the most high-profile figure to comment on the situation.

“We’re exploring a sale, but there’s no urgency, no time frame for us, and as far as I’m concerned, it’s business as usual,” Werner told the Globe.

“One outcome could be our continued stewardship for quite a while.”

When it comes to the short and medium-term future of the club, that it is “business as usual” is significant for Liverpool, especially ahead of two vital transfer windows.

Werner’s words are further confirmation of what we already know but straight from the source itself.

There can be no rushing the process and with a valuation in excess of £3 billion, the right buyer will take time.

Salah in action and match of the night

He may been in the Egyptian red but Salah was assisting once more, here he is setting up his side’s second goal in Friday’s 2-1 win over Belgium, one side is going to the World Cup and the other is not…

Mohamed Salah assists Trezeguet to put Egypt 2-0 up against the World’s Number 2 ranked side?
pic.twitter.com/oSFXn0NlbZ

If you’re interested in watching Derby, again, then tune into Sky Sports at 8pm as they take on Portsmouth in League One.

Enjoy your weekend, Reds…and the start of the World Cup on Sunday, if you’re tuning in.