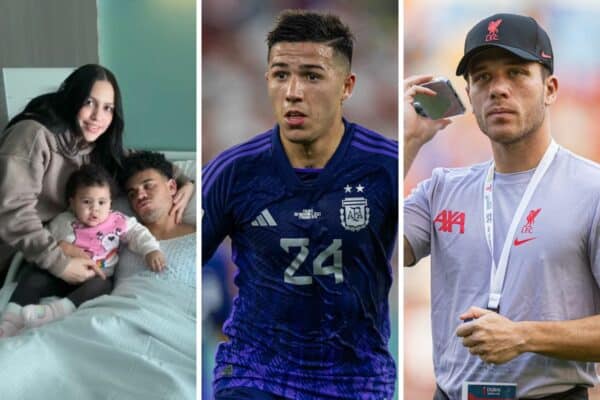 In today’s Liverpool news round up, we cover reports from Argentina stating Liverpool have a pre-agreement in place to sign Benfica midfielder Enzo Fernandez, a double injury boost from Dubai, and more.

Enzo deal on the cards?

Last week, Record, one of the leading sources for news in Portugal, claimed Liverpool had been in contact with Benfica regarding Enzo Fernandez’s availability, with the 21-year-old impressing for Argentina at the World Cup.

Other reports in Spain suggested the Reds had a pre-agreement in place to sign him next summer, with Real Madrid also said to be interested.

Today, there have been similar claims from Argentina, with Dario La Capital claiming Liverpool have a deal in place to sign Fernandez in June 2023.

Another source in South America, Varsky Sports, say Liverpool “have approached the player with a contract offer” but are not yet in negotiations with Benfica.

A pre-agreement at this stage seems unlikely, given he has a reported release clause in the region of €120 million, but Fernandez is a player who continues to be linked with the Reds.

Elsewhere, The Athletic‘s David Ornstein has today reported that there is a feeling among the clubs interested in Jude Bellingham that Liverpool are ‘leading the race’ to secure his signature.

Ornstein also claims Liverpool made “informal contact” over a move for Ajax and Ghana midfielder Mohammed Kudus last summer, another player who has been linked with a move to Anfield in recent weeks.

All this, and it’s not even January yet!

Socials – The Mbappe conspiracies are back!

Ok just to put a brightener on the England loss for liverpool fans.. this is my boy.. I will not say what she said but this is @KMbappe mum @LFCTransferRoom @TheRedmenTV ?? #LFC #ENGFRA pic.twitter.com/mg6cU6hU8S

No World Cup tonight, with the semi-finals getting started tomorrow, but in the Championship, Sunderland host West Brom at 8pm (GMT).