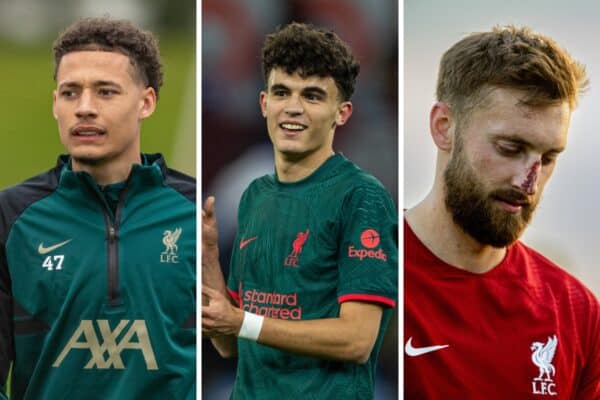 Liverpool have recalled yet another loanee and this one could trigger a defensive reshuffle, while the King’s upcoming coronation could cause yet another Premier League disruption.

Liverpool confirmed on Monday that Rhys Williams has been recalled early from his loan spell at Blackpool after making 17 appearances.

The centre-back played just 15 minutes across Blackpool’s last five games but now makes his return to Liverpool, which could trigger a January transfer for Nat Phillips.

Just like last year, Williams was recalled from his loan spell and Phillips went on to enjoy his own for the second half of the season, passing on the responsibilities of Klopp’s fifth-choice centre-back.

A report in the Echo on Monday reported that Phillips is “of interest to a number of clubs” and offers are expected before the transfer deadline on January 31 at 11pm (UK).

That could be for either a loan or a permanent move. At 25, though, Phillips is surely deserving of a permanent place to call home and a chance to play regular first-team minutes.

Williams’ return would triggers this defensive reshuffle but he is now the sixth loanee to be recalled this month, a figure that is not exactly encouraging.

Frank’s time is up

Flashback & match of the night

Now, who remembers this mad game in 2016?! A goal each after 90 minutes, Lallana with the winner and Klopp left with broken glasses…