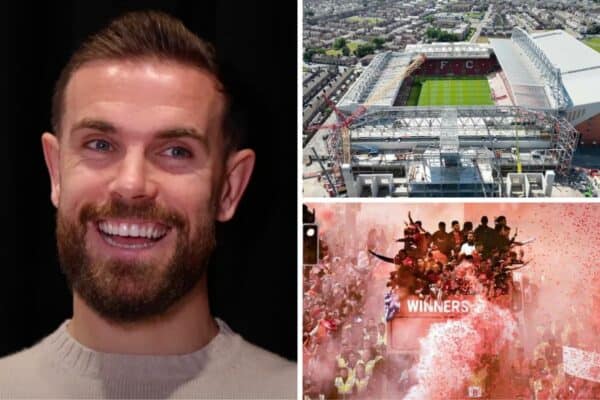 The best of This Is Anfield in 2022: Henderson exclusive, Anfield footage and more

As 2022 draws to a close with Liverpool having delivered a Carabao Cup, an FA Cup and a Community Shield, we take a look back at the best This Is Anfield had to offer throughout the year.

If you enjoy This Is Anfield and would like to support our independent Liverpool FC coverage, please consider becoming a Premium Member. You’ll also enjoy ad-free access to the web site and the chance to enter exclusive competitions. Sign up for a 7-day free trial here.

Exclusive interview with the Liverpool captain

To mark the launch of his first autobiography in October, Jordan Henderson sat down with This Is Anfield editor Matt Ladson to discuss his life as Liverpool’s captain.

In a 16-minute interview, the skipper reflected on the club’s success under Jurgen Klopp, picked a player who took him by surprise in training, and discussed what it takes to make it as a Liverpool player.

Henderson’s reaction when Matt explained a remarkable stat about the XI that started the 2019 Champions League final was something to behold!

Read through our exclusive with Henderson in full here.

Throughout the year, This Is Anfield have published exclusive video footage and updates showing the progress made on the redevelopment of the Anfield Road End.

In March, Colin Roddy of The Buckingham group explained that the project was “on target,” while LFC managing director Andy Hughes said he was “delighted” with the progress.

A month later, we were able to share our first drone video over Anfield, and have since published footage showing work on the upper tier, the roof truss, a new pitch, and most recently, an update during the World Cup.

All of our Anfield Road End videos can be found here.

Liverpool Legends faced Barcelona at Anfield in March, before a double header home and away to Man United later in the year.

This Is Anfield held exclusive interviews with some of the legends involved, including the likes of Jamie Carragher, Dirk Kuyt, Vladimir Smicer and Martin Skrtel.

In November, South Africa’s Rugby World Cup winning captain Siya Kolisi spoke to This Is Anfield editorial assistant Jack Sear about his love for Liverpool FC and his blossoming relationship with Jurgen Klopp.

Feature writer Jeff Goulding told the stories of a number of LFC’s most legendary players.

Throughout the year, This Is Anfield has been a one-stop shop for Liverpool FC related quizzes.

A variety of challenging quizzes have allowed supporters to test their knowledge on all things LFC, from current events, to ones based around players and teams from years gone by.

During the World Cup, we tested supporters with A-Z player surname quizzes, while other recent quizzes include the 33 teams Trent Alexander-Arnold has assisted against and Jordan Henderson’s 115 Liverpool team-mates.

All of This Is Anfield’s quizzes can be found here.

Take a look at 10 of This Is Anfield’s favourite LFC photos from 2022, from cup wins, the parade and Anfield South!

This Is Anfield provides every pre and post-match press conference with Klopp, along with a variety of other content including features and interviews.

Take a look through the playlist above and enjoy some of our best content so far!

If you enjoy This Is Anfield and would like to support our independent Liverpool FC coverage, please consider becoming a Premium Member. You’ll also enjoy ad-free access to the web site and the chance to enter exclusive competitions. Sign up for a 7-day free trial here.